Washington, D.C. - Three cities in China, India, and Vietnam are undertaking major sustainable transport policy initiatives, the World Resources Institute (WRI) will announce at the annual meeting of the Transportation Research Board (TRB), which begins here on Sunday. Xi'an, China, Pune, India, and Hanoi, Vietnam are each suffering from the spreading of the population into suburbs, which is leading to longer commutes and the need for well-organized bus or metro rail lines. But WRI and its partners have introduced transport and environment officials to each other, creating shared knowledge across departments and in multiple cities.

"With the help of these transport experts, and by working with officials in other cities, we are identifying major knowledge gaps and working toward the introduction of a comprehensive transport plan for Xi'an," said Mao Zhong An, deputy division chief of the Xi'an Municipal Construction Commission." 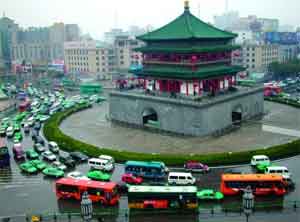 "Passenger transport is heading in unsustainable directions in all three cities," added WRI's Wei-Shiuen Ng, who co-authored the study along with Cornie Huizenga of the ADB. Schipper added, "The emphasis throughout Asia has been on adding roads or building high-cost systems such as rail-based metros at the expense of more environmentally sustainable modes, such as non-motorized transport and lower-cost bus systems."

The authors developed a set of indicators for each of the three cities, including access, safety, environment, economic and social sustainability, and governance. Air pollution and congestion from motor vehicles is found to be particularly serious in Pune primarily because of the high numbers of cars, two-wheelers, and rickshaws swarming the city's narrow streets and poor sidewalks. With the numbers of cars and two-wheelers in Hanoi and Pune doubling since 1997, and the number of cars now rising rapidly in Xi'an, congestion can only get worse, the study shows.

Ng said, "The rate of vehicle ownership by individuals is growing much more rapidly than what can be accommodated by public or private infrastructure, and it is slowing all traffic. In addition, because more than half of all trips in these cities are made on foot or by two- or three-wheeled vehicles, exposure of a majority of people to direct emissions from motor vehicles is a problem."

City leaders have already been presented with these findings. Xi'an is preparing its first transport plan, and several resulting initiatives have already improved traffic flows. Pune has begun improving bus services, spearheaded by bus rapid transit, after examining the real implications of snarled traffic, deaths from two-wheelers, and air pollution made clear in the WRI study. Hanoi, with help from the World Bank, is moving faster towards a new urban air quality and transport package. The major dilemma for authorities in these cities - as well as hundreds of other cities worldwide who could benefit from the study's quantitative approach - is how to deal with the inevitable move of people to larger homes located farther away from the city centers.

Transport energy use and CO2 emissions are especially important for Asian cities, where the transport sector has now become the fastest-growing sector contributing to climate change. For a full schedule of the TRB Annual Conference, which is expected to attract 10,000 transportation professionals from around the world, you can visit www.trb.org/meeting.