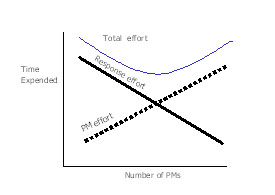 Reno in 1998, and Hernando County in 2001 each established a PM traffic signals program. Both the city and county Public Works Departments are responsible for traffic signals but they each had a unique set of circumstances under which they operate. The obvious difference is that one is a City and the other is a County. In addition, due to their geographical locations (e.g., Florida is semi-tropical; much of Nevada's topography is desert and very dry) their overall maintenance efforts varied for many of the assets they maintained.

Reno is responsible for maintaining 220 traffic signals encompassing a 75-square mile area; there are eight full time traffic employees. Hernando County is responsible for maintaining 72 traffic signals in a 478-square mile region with a staff of five full time employees. The county was also experiencing very rapid population growth – more than 200 percent since 1980, and was also transitioning from a rural to urban county. Reno was already urbanized and experiencing a considerable but lower population growth rate of 34 percent.

Reno and Hernando each had a complete operations review, independent of each other, that identified the need for a preventative maintenance plan. The reviews identified several opportunities for improvement for both, including scheduling work by activity, implementing a PM plan for traffic signals and linking the work to an annual schedule to establish accountability.

Based upon the review it was expected that there would be efficiency and cost saving improvements since the prevailing attitude for maintenance would no longer be "fix it when it breaks" and as a result there would be a reduction in response calls that would increase effectiveness. The benefits of implementing these recommendations went beyond the cost of implementation. Reno and Hernando County would then be able to proactively address maintenance and schedule work. Overall customer satisfaction would increase.

Before setting up a traffic signals PM plan, both the city and county implemented a complete computerized maintenance management system for infrastructure. Both systems provided a tool to help manage maintenance resources and project the workload and match that to the resource needs.

Once this was complete, Reno and Hernando County were able to use their systems to specifically monitor traffic signal PM and response work. Several tools that were put in place using the system include activity guidelines with work criteria, activity plans and monitoring capabilities for each activity as well as customer requests related to traffic signals.

Initially, an activity plan and guidelines for each the traffic signal activity was set up with an annual plan that projected an estimate for total workload. Work was then scheduled on a bi-weekly basis and actual information was recorded in the system for both traffic signal overhead and cabinet PMs. Based upon processes set up during the operations review and implementation phase, actual work was then compared to the planned amount. Throughout the year, traffic signal work was continually monitored to see if the established goals were being met. With each new fiscal year goals were adjusted based upon work done and improvements recorded. 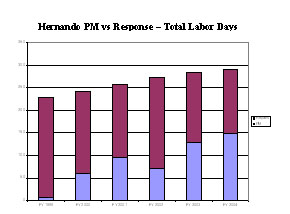 When Hernando County started a performance review it was as a result of a negative auditor report citing a problem with productivity. As a result of implementing a maintenance system, in 2001, efficiency increased 14 percent. In 2003, after two years of using a maintenance system, Hernando County was recognized by the National Association of Counties and awarded the 2003 Achievement Award Winner for its program "Applying Best Management Practices with In-House Designed Maintenance Management System."

Since the inception of the traffic signals PM program, the total number of labor days spent between repair activities and PM activities have remained relatively constant with less than a 75 day increase in effort over a six- year period from 1999 to 2004, while overall PM labor days increased and response labor days have decreased. This indicates that while the county has more assets to maintain they are being more efficient and effective with their resources. In addition the actual repairs performed on signals, which can be costly, have decreased while PMs have increased. All information was monitored and tracked in the County's maintenance management system and reviewed monthly. 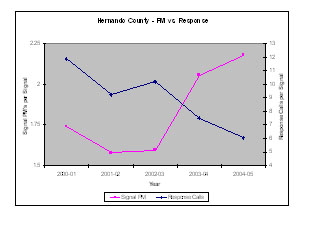 Both labor days used and repairs performed are good indicators that the PM program implemented by the county works, but a good indication that customers (citizens) are satisfied with the work being performed by the county is the reduction in traffic response calls. The number of calls went from a high of 650 in FY 2002-03 to a low of 470 in FY 2004-05. This is a 27 percent reduction in complaints by citizens.

Reno has had many similar benefits. Within the first four years of implementation, efficiency savings totaled about 35 percent. Within Traffic Operations, work is scheduled on a bi-weekly basis and supervisors review actual data monthly. As a result, cabinet intersection PMs increased while costly response calls decreased dramatically from 1998-2005. This relationship is made clearer by a slight increase in response calls when PMs decreased during FY 2003-04 and FY 2004-05.

In addition Reno has many planning tools in place that it uses to monitor and schedule work. Bi-weekly, a scheduling meeting is held to review work that needs to be done and using the system's activity plans, PM activity accomplishment is reviewed each month to determine if they are performing the activities as planned. Information can also be used to estimate cost of repairs vs. PMs to justify the importance of a PM program for traffic signals. 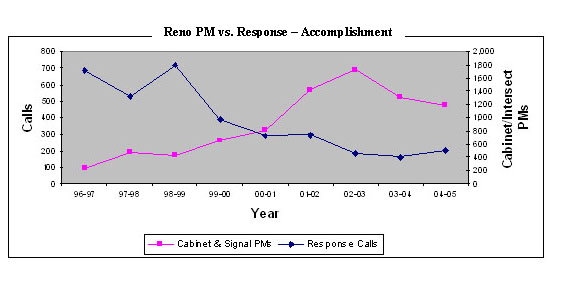 Reno and Hernando continue to enhance their PM program. In 2004 Reno implemented a new maintenance system that gives them enhanced capabilities for monitoring and tracking work that includes integrating Geographical Information Systems (GIS) and attaching digital pictures to work requests. Hernando is enhancing their in-house designed system to integrate new technologies as well with plans for GIS integration and usage of wireless technologies for access to their work management system that identifies service request and tracks work.

Both Reno and Hernando County intend on maintaining the improvement and cost efficiencies they have achieved since implementing their respective traffic signals PM programs. The PM program not only works for two agencies in different geographical, density and climatic environments but they are also over 2,500 miles apart!