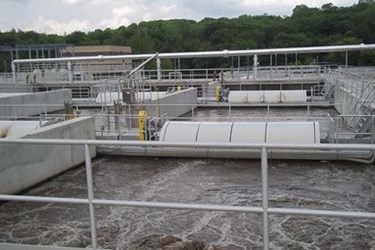 Economic development has its price and sometimes calls for major upgrades to a community’s wastewater treatment facilities. In Fort Dodge, Iowa, that was the case where expansion of new Cargill and CJ Bio America plants in a nearby industrial park required additional capacity and BOD and TKN removal capabilities at the Fort Dodge Water Pollution Control Facility (FDWPCF).

The two agricultural production plants added about 5 MGD flow to the FDWPCF and increased BOD and TKN loadings by 100 to 300 percent, respectively. To meet the new treatment requirements, Fort Dodge chose to expand the biological treatment technology it had been using for several years—the Evoqua VLR® System. Essentially an oxidation ditch tipped on its side, the system not only saved on construction costs and footprint requirements when compared to conventional treatment, it gave the Fort Dodge plant the ability to simultaneously nitrify and denitrify.

“We selected VLR systems back in 1998 when we faced new ammonia limits,” explains Mike Trotter of McClure Engineering Co., Fort Dodge, the design firm on the project. “We decided to install suspended growth biological technology to replace our old two-stage trickling filters.

“We looked at several biological processes, and the VLR systems offered more flexibility,” he says, noting that the design team and the city were looking ahead to anticipated nutrient removal requirements in the future.

Not yet a member of Public Works.com? Register today.